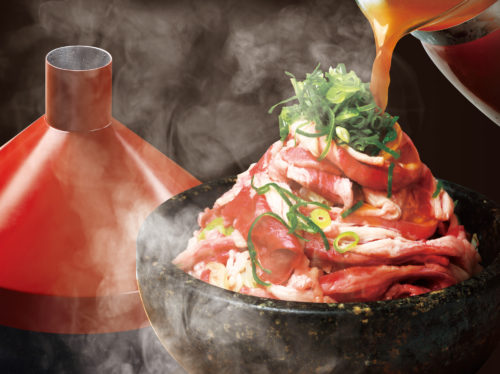 Nakanishi: I have heard about Tonkotsu Kazan Ramen from the people in Singapore for several years. Your achievement leading the Japanese food business in foreign countries to "a successful brand establishment from scratch" sounds absolutely remarkable. Can you tell me about the journey you have taken?

Yoshida: Sunpark manages restaurant business mainly in the Kansai (west side) area. Based on our strong performance, we planned on entering the market in Tokyo in 2011. However, due to some changes in social situations in Japan at that time, President Takagi took the plunge and changed his direction to expand globally instead into Singapore, the center of Asia, where business growth was expected. One of the key reasons Singapore was targeted was that we happened to visit the country a year before at a company trip and found it very attractive as a potential market to expand our business.

At that time, I was a restaurant operation manager and not so interested in the overseas market. Nevertheless, I took it as a new opportunity and applied for an internal job post for an overseas expansion project. Among about 30 in-house applicants, I passed through the first screening, and after an interview in English of the final screening, I was unexpectedly selected.

My English language skill has dramatically improved by now, but at that time it was at the level of 190 out of 900 on TOEIC. I still wonder sometimes why I was selected for the position, but I think that my consistent demeanor and confidence while communicating in English was the key factor of the victory.

Since I have been using English at work, my business English communication skill has increased to a practical level. My achievement is solely due to support and understanding from the people I met in Singapore, the president, my immediate boss, and my team in Japan.

An event I remember the most around that time is at the hotel I stayed the night of my arrival in Singapore. The boss who accompanied me asked me, “Do you think you will succeed here?" I confidently answered, “Yes I will succeed” because I was very confident.

Nakanishi: Was Sunpark originally planned to open a new avenue worldwide in the ramen category? 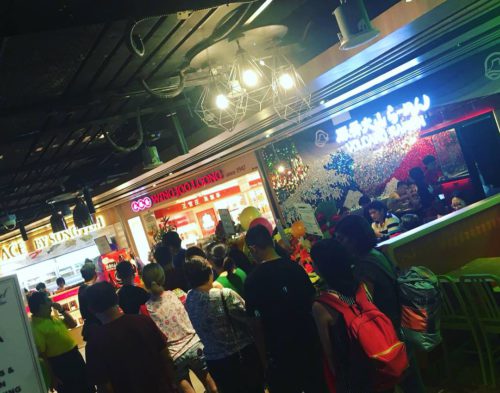 Yoshida: No, we did not have anything particular, but the ramen was one of three categories when we narrowed down the potential candidates.

I was dispatched to Singapore as a preparatory member and managed to establish a business network on my own by actively participating in the local Japanese community and the restaurant association while I worked part-time at a Japanese Izakaya restaurant that was acquainted within Singapore's restaurant industry. I also was able to visit more than 30 properties per week as I planned. My life was extremely busy focusing on improving my English skill by interacting with locals through the business, and researching other restaurants and looking for potential properties after work. In addition, finding suppliers was a real pain. But my days were fun and fulfilling rather than a hardship.

Nakanishi: It's amazing that you have beat other competitors and established the current successful style in the business that was heating up. 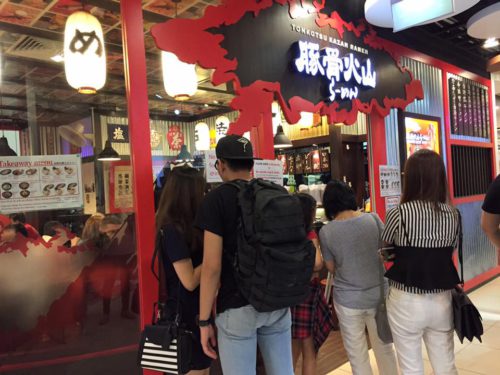 Yoshida: What we focused on differentiating from other restaurants was “Hinabe (fire pot)” which is a very popular dish among Chinese and Asian people living in Singapore as well as the boom of Tonkotsu (pork flavor soup) that they are fond of.

After numerous trials and errors, we had reached a strategy of using stone-fired bowls that enabled soups to be steaming hot temperature.

Furthermore, the president of our company came up with an unprecedented idea to cover the prepared dish, and "Kazan (volcano) Ramen" was born in the performance of placing a volcano shaped lid on the bowl in front of customers to emit steam like an erupting volcano.

As a result, this performance was a great hit with the local people, the restaurant was interviewed on TV, and the customers who became repeaters uploaded videos to YOUTUBE, which led to spreading Tonkotsu Kazan Ramen to the world.

We finalized our plan to compete with the ramen business and primary menu items. Next step was property acquisition. I walked around Singapore with my feet. High traffic area was the most important priority for me to locate the first restaurant. By researching about 100 potential locations, my final choice was the current Novena location due to the highest traffic area.

In Singapore, a property acquisition can only be confirmed by placing a deposit. I wanted to hold the property at any cost, I didn't ask for approval beforehand from the president or my boss, and signed the contract without a permission. When I reported it after the fact, I got scorched badly that I remember as if it were yesterday (laughs).

After a few ado, the first restaurant opened on the second floor of Novena, Singapore's subway MRT.

Nakanishi: Sounds like you had been though a lot of challenges while developing a business and products, and selecting a location in a foreign country which you were not familiar with.

How did you handle the hardships and commitments of sales in starting the new restaurant, such as customer service training of local staff, differentiation from other similar businesses, and streamlining operations? 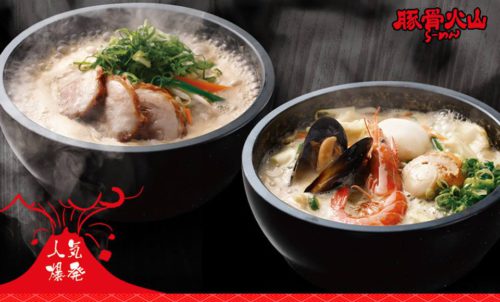 Yoshida: As I mentioned earlier, my TOEIC score was as low as 190 points, but it was advanced to around 460 after 3 months. I almost had no issue handling my interviews for the part-time positions at the local restaurant on my own with an aid of using body language since my listening skill had improved.

At the first restaurant, we made a strategy to appeal to the vigorous spirit of Japanese ramen restaurants. The lot size was about 50 m2.

In the beginning, we had to conduct training in unfortunate swelter conditions because the air conditioning stopped working due to the construction.

In order to promote the “Energetic” atmosphere, we taught employees three Japanese languages;

1 “Ahh ~! Arigato gozaimasu! (Thank you.)” * Extend a sound. This is a training to open mouth wide to make a loud voice.

We asked the kitchen staff to use the Japanese language, “Order hairimashita! (Order please!)” The drill to practice the Japanese speaking loud together was repeated over and over.

Because the restaurant was located on the 2nd floor, we instructed the staff to say them loud to advertise our business for the passers-by on the ground level looking up.

However, the most important operation process was not fully established, and training was repeated until right before opening the restaurant. Also the soup quality was not consistent, for example, the temperature was not hot enough to "simmer", which was the key characteristic of our product, or soup was too thin. In addition, serving food slowed down due to poor coordination between the kitchen and floor staff. We were scolded by the president who came from Japan during his entire visit. We were in a situation to possibly delay the scheduled opening date.

Nakanishi: The opening was approaching. What did it look like?

Yoshida: Restaurants often do a soft opening before the grand opening, and we also scheduled to open silently. However, we were not quite ready to have customers for lunch hour the first day, we decided to change to role-playing and asked the president for the final check. Finally, we received the GO sign from him. The air conditioner that was out of order was also operational and we finally opened the restaurant in the afternoon, half a day delayed.

Despite the soft opening and delay to open in the afternoon, there were already many customers lined up in front of the restaurant. This was the result of our daily loud voice training that appealed our “Energetic” spirit.

On that day, an average of 20 to 30 customers continued to be waiting from the elevator to the entrance of the restaurant until the restaurant closed.

Since the grand opening, there has been always a long line of customers that the first Tonkotsu Kazan Ramen restaurant is a great success.

In Singapore, we opened the second restaurant thereafter. Next we established the business in Thailand and Indonesia accordingly. In Thailand, things went smoother because there are many customers and employees whose parents are Japanese, and they study Japanese. However, while I scolded the initial staff in front of everyone, some did not show up next day. I learned it was not a good business practice in some cultures, and I did not repeat such behaviors. In other countries, I try to understand their culture when training local staff while I convey the goodness of Japan.

Nowadays, I try to compliment first before bringing up the area to improve even in Japan.

Nakanishi: Regarding the product, tell us about the soup, broth, ingredients, and feedback of local people?

Yoshida: The Kaeshi (broth) used for ramen is mostly consistent through all restaurants. There are four types; soy sauce, miso, salt, and curry, which are manufactured in a black box. The ingredients that can be procured vary from each country, so the blend of soup varies from country to country. Product development staff has been skillfully coordinating between headquarters procurement and local procurement based on availabilities. The operation process has kept updated to make it as simple as possible.

Taste reviews from customers have been excellent, and in Singapore Tonkotsu Kazan Raman ranked as one of the seven best Japanese ramen restaurants voted by customers.

Seven years have passed since the grand opening, and the total number of Tonkotsu Kazan Raman restaurants has increased to fifteen locations; nine directly managed restaurants and six franchises. Since the restaurants have been highly evaluated in every country we opened, I think we can expand the business further and open more restaurants.

Nakanishi: Can you tell us about the future prospects for global expansions? 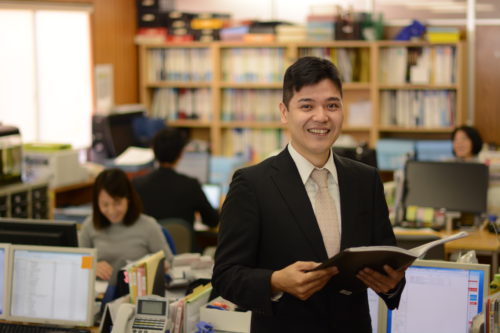 Yoshida: We would like to increase both directly managed restaurants and franchises. Currently, all franchisees are in the unit form.

We are currently developing business in three Southeast Asian countries and Hawaii, we plan to expand into Europe and North America, where ramen is booming.

Personally, I would like to launch in the UK.

Our company has a passion to spread “Omotenashi (our polished hospitality)” through Japanese food. We wish customers all over the world to know about a country of "Japan" through our restaurants.

Since the food and beverage business deployed overseas is a communication with people from various countries, we strive to make every effort to have people understand the Japanese-style service while adapting it to the culture of each country.

Moving forward, we would like to spread authentic Japanese foods by introducing a variety of menu items such as original pancakes and curry in addition to Tonkotsu Kazan Ramen.

Tonkotsu Kazan is known to be the very first entertainment ramen restaurant to come out of Japan. Rumors of its success story have been heard by many people for several years. After I heard its brand story, I could picture the hardships and excitement of Mr. Yoshida and everyone who was involved in establishing Tonkotsu Kazan at that time. I'm anxiously looking forward to its continued global expansion. Just too bad it’s not available in Japan! by Lika Nakanishi
Click here to go to the inquiry form