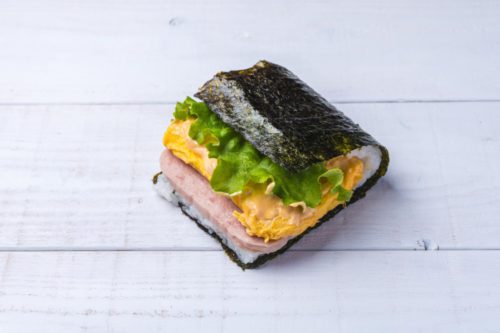 "Brand Story" is an article focusing mainly on the birth of a franchise brand. The first featuring covers a story behind the birth of Onigiri Burger (rice ball burger) and future prospects by Mr.Yoshikawa.
Nakanishi: You are one of the founders of Beard Papa’s. Could you tell us about your career leading up to this rice ball burger?
Yoshikawa: I started up Beard Papa’s with my two colleagues. Before then, I learned about everything from a large food & beverage company including the store management, sales promotion, brand development, menu development, customer management, etc. At that time, we also established a member-only restaurant service for more than 60,000 members consisting of company’s directors or higher positions to enjoy Japanese / Chinese /Italian / French foods. We provided services using member databases anywhere in the country. I think it was a high-class business category boasting the world's largest membership. In addition, we created many new business types and new brands that were new for the Japanese market. Afterward, I had a lot of experiences as a manager at Beard Papa’s and left the company “MUGINOHO” to another company and travelled around the world. During that period, I have always strived to spread a delicious and pleasing brand to many people with the slogan “Make for you”, which was the basis of Beard Papa’s while helping the activities of other companies. This slogan is also applied to the brand-new "Onigiri Burger".
Nakanishi: You worked for a large company before establishing “MUGINOHO”. What was your turning point?
Yoshikawa: It was The Great Hanshin Awaji Earthquake. I was particularly worried about my mother. At that time my mother ran a small restaurant, but I did not inherit it as a result, and started a bakery with two colleagues, which was the first business of “MUGINOHO”. The company name of “MUGINOHO” is derived from the ears of wheat, which is a main ingredient for bread. The bakery business was attractive for me, but it was needed to put a lot of items in a shop and there were a lot of waste & loss. Also, the sales unit was different from that of the previous job. I had a lot of difficulties to be familiar with it. At that time, I met a successful friend with cream puffs.
Nakanishi: That was a trigger for Beard Papa’s?
Yoshikawa: The business category was good and we thought it would be better to introduce "sold-out-for-sale” style. This is the sushi restaurant's idea. It is a business style that clearly tell customers "sold out" if there is no more for selling. Also, pastry chefs around us at the time showed much interest in cakes since they are more colourful than cream puffs. Then I came up with a sweet that we make it in front of customers which was also less competition that was a direction for branding. We developed a new way of selling by focusing to show the products. In fact, in the world of sweets, we became a pioneer of "showing sweets". After a variety of experiences, I left "MUGINOHO", but I still cheer it from the bottom of my heart, and the network / relationship established at that time is still our treasure.
Nakanishi: The same know-how is applied to Onigiri Burger? Please talk about Onigiri Burger by all means. 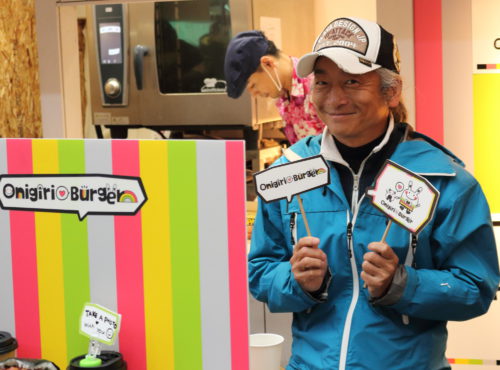 Yoshikawa: I visited various countries after leaving the company. I also participated in the Honolulu marathon and enjoyed playing golf with my friends. Playing golf in Hawaii is not as rigid as in Japan, and instead of eating at the club house, we can choose a variety of easy-to-eat foods. At that time, I met spam rice balls. My first impression was just delicious. Spam is a staple of the American military and is a familiar regular food and said as “Hawaiian steak” in Hawaii. About a year and a month ago, I met the prototype of our current business model at a rice ball shop at the airport in Okinawa. It is an Okinawa-style rice ball, namely sandwiching ingredients in rice. They made rice balls in front of customers at the shop. That was truly a reproduction of our origin "Make for you". As take-out foods and lunch boxes at convenience stores are common now, the impression was so intensive when a “Make for you” suddenly appeared in front of me and I thought it is a "Beard Papa's rice ball version!" that inspired my idea of showing "Onigiri Burger” for customers.
Nakanishi:With a great awareness, how was the product development after that?
Yoshikawa: I asked a part of the product development to a sushi restaurant that I have been familiar with before. We use selected ingredients such as sushi rice and nori (dried seaweed) that the sushi chef always uses. We also add particular ingredients such as Kinpira (cooked burdock roots) and Shiso (Japanese herb) in order to focus more on the taste of Japanese cuisine.
Nakanishi: How is the response to this Kuromon market shop? 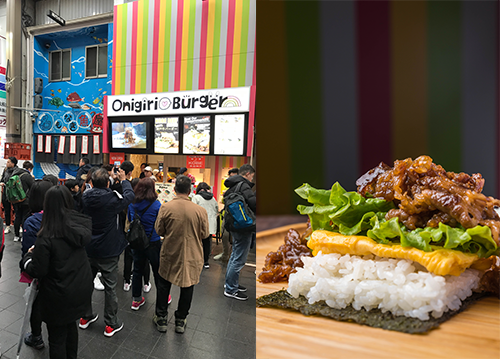 Yoshikawa: I feel quite responsive. Kobe beef burger that is the highest price of 1,200 yen accounts for 40% of sales. Our marketing that “the customers coming to Japan like what they could not eat in local” is a bingo.
Nakanishi: Could you tell me why you chose Kuromon Market?
Yoshikawa: I had consciously selected Kuromon Market in Osaka, which was once called "The Nation's Kitchen", as a place for serious business and we waited until a shop location became available. Of course there are a lot of inbound customers there now, but in the past, the predecessors have created and worked hard to create new food cultures from here. As a result, we made the home base here through a temporary shop during events and a pilot shop. I think this was not roundabout but gave us a very good result. In fact, we were able to verify that our solid marketing “inbound customers are the main target” is right. It looks like the selling style has fallen from the sky. The two experimental shops taught us that "what we provide to our customers and extraordinary foods should be different from daily foods". Based on this thought, we will pursue the product development that will continue to be appreciated.
Nakanishi: How many shops do you plan to develop in the future, and what kind of image do you have about the shop staff? 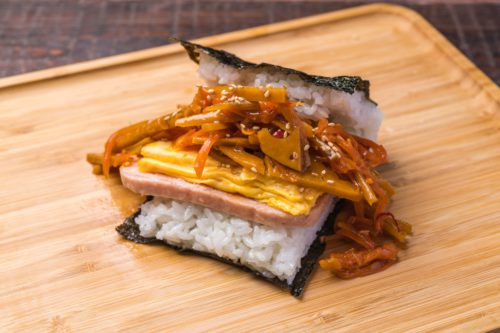 Yoshikawa: About 7 shops in Japan. We aim for the locations and airports where tourists gather around the world. We already have received offers from various countries although we just opened the shop. The shop staff that I'm thinking are not only young people, but also mothers in 40s and 60s who have made meals and lunch boxes with love for their children both in Japan and overseas. It should be mothers in the world who may deliver and realize our concept. As with Beard Papa’s, there is a material handling where anyone can make good products if trained. In other words, an environmental construction / operating & shop manuals / a flow line construction are most important. A system for training people will be built by the environment.
Nakanishi: Could you tell us about the future prospects?
Yoshikawa: Even if you think something is not refined, you can change the concept to reform the operation, and brush up the taste to make it a completely different business. We are a professional on that kind. We just apply our accumulated know-how to this new brand and brush it up and just wait for right partners in and outside Japan. The only thing that can be said is that only people who climb the top of Mt. Fuji can see the view of the mountain top. We also enjoy the positive impact of SNS, but relying solely on that is risky. We make sure that the popular brand does not end in a short time. With regard to a franchise who sells one single product, now it is difficult to survive without constantly making efforts to continue the brand recognition. In the future, I consider that the business style that can compete with the convenience store, which dislikes poor efficiency, should be “doing things that are inefficient, that is, making and selling for customers who are just in front of you”. I would like to put QSC (Quality + Service + Cleanliness), Atmosphere and Performance at the top.

It was a really fun interview. I told about "Benihana” that is one of the three restaurants I mostly impressed in my life. Even now, I can remember the sight that customers delighted over the counter at Benihana in Hawaii. It turned out that the same delight as that of BENIHANA is aimed for the iron plate used for cooking Kobe beef Onigiri Burger at Kuromon Market. Mr. Rocky Aoki led his steak restaurant to a famous one at once with a unique performance in the homeland of beef steak. It seems that the same idea is inherited to Onigiri Burger produced by Mr. Yoshikawa.
Click here to go to the inquiry form